Through extensive experience and knowledge, each carefully chosen guide is put through rigorous training and an assistant-guide apprenticeship program. When your guide is ready to lead your trip, you can rest assured that he or she has a solid foundation of experience and knowledge to make your trip safe, educational and adventurous. All guides are CPR/first aid certified and have taken Leave No Trace Awareness course. 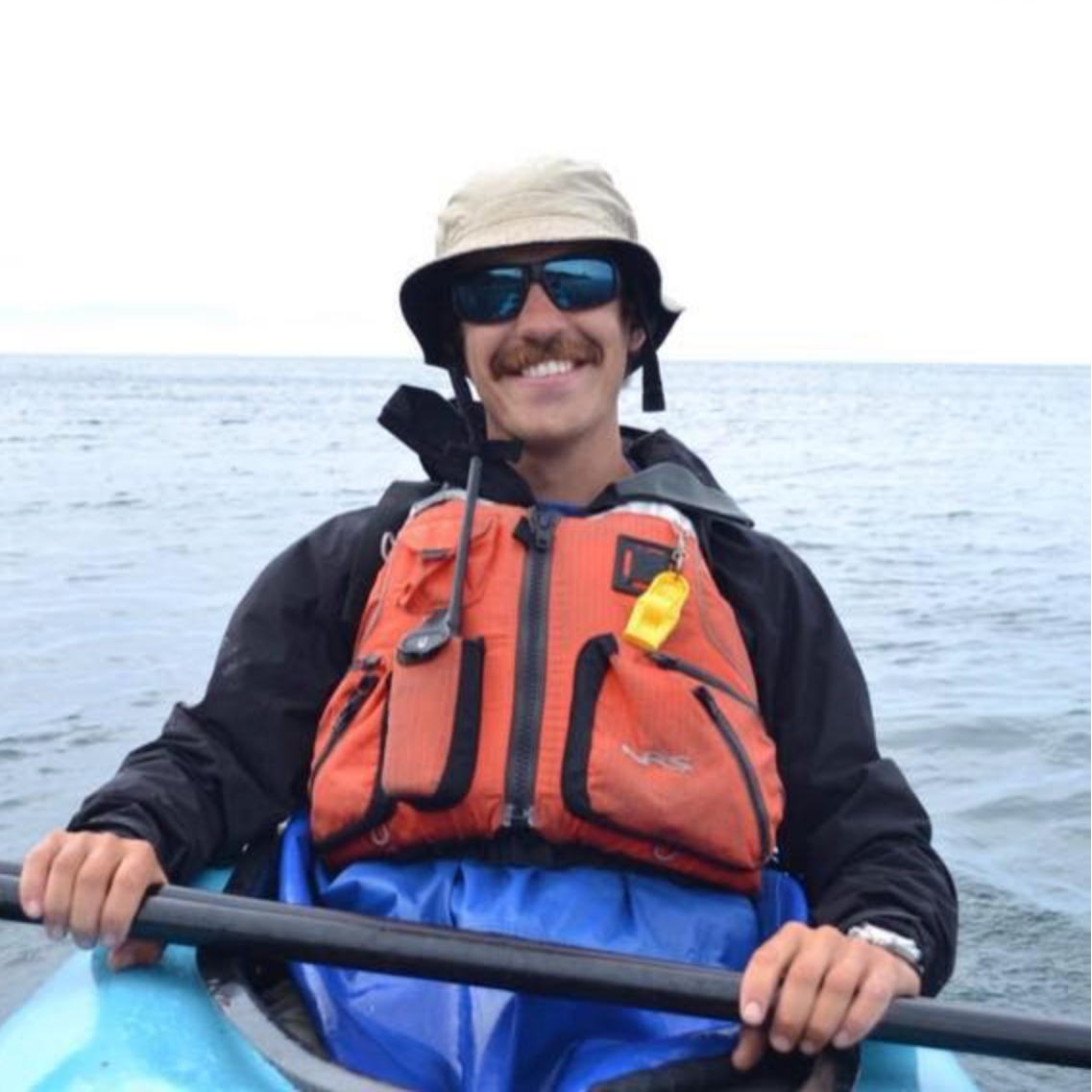 Hailing all the way from South Georgia, Cole is back for his fifth summer with San Juan Kayak Expeditions! After guiding for four summers and spending a few winters running twenty day canoeing expeditions for at-risk Florida youth for Outward Bound, Cole tried his hand at a number of local jobs before coming back as Operations Manager.for the 2021 season. Cole graduated with a bachelor’s degree in Outdoor Education from Georgia College in 2016 and has been living on the island ever since. Cole is also an American Canoe Association Level III kayaking instructor and a Wilderness First Responder. When he is not in the office, you can find him pouring beers at the local brewery or biking around the island. If you’re lucky, you may even get him on a tour! 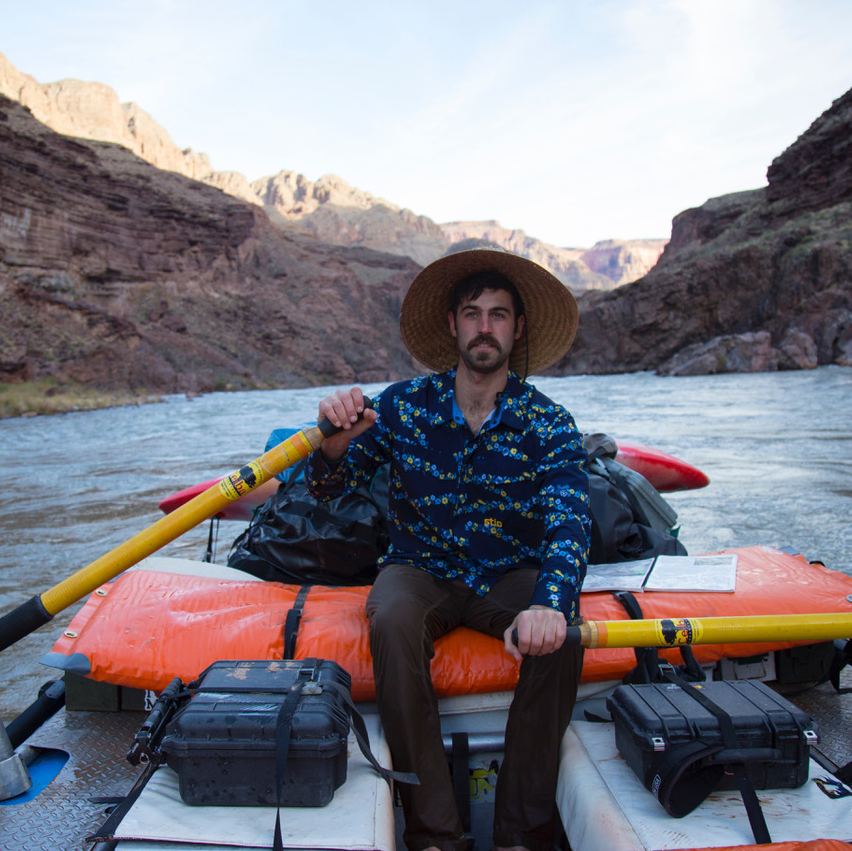 Jury (30 yrs.) will be returning for his second season as a guide with SJKE, he is returning after moving to in Missoula, Montana where he has been working in conservation and restoration in the Bitterroot Mountains while completing a multidisciplinary degree (Russian, Journalism and Geography) from the University of Montana. Spending most of his twenties traveling the globe, working seasonally, and chasing his curiosities Jury has always held the San Juan Islands has one of his favorite places… the community, the wildlife and most of all the paddling are next to none. He looks forward to sharing with you what he finds so special about this incredible region. 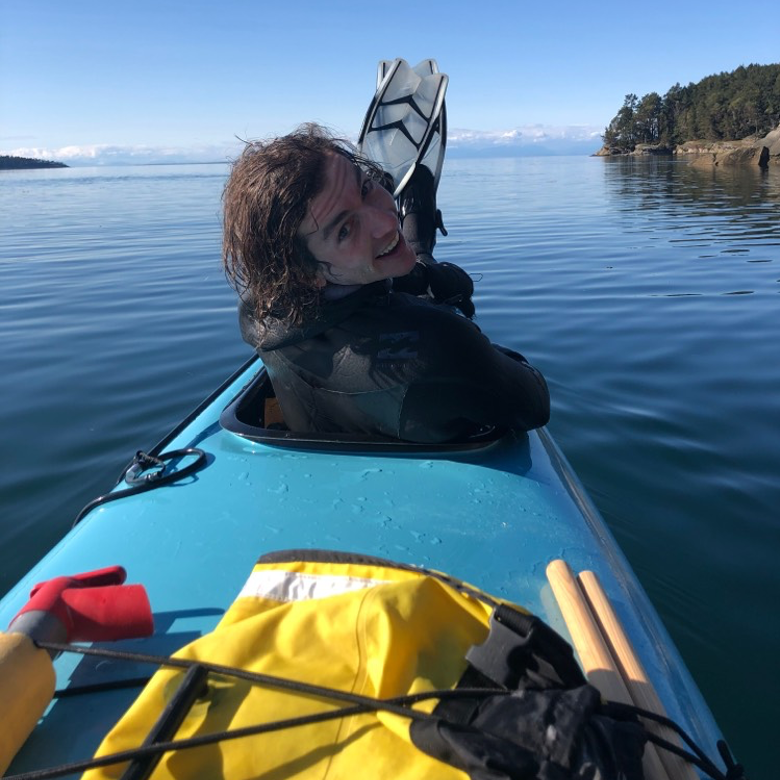 Nathan has paddled Puget Sound for over 25 years, albeit mostly on bits of driftwood for the first half. At Cornell University, he studied Science of Earth Systems—sneaking off to Hawai‘i Island to avoid the winters and teach a field research program. Nathan has kayaked the northern Waipio valley coast of Hawai‘i, the Ligurian coastline in Italy, some random ponds in upstate New York, and many beaches in between.

This summer, Nathan lives near False Bay on San Juan Island, where the wilder waves and wind of the Western shore keep him endlessly rocking on foam. He loves welcoming guests into outdoor spaces and letting them explore their own outdoor beauty. For wildlife cameos, geology facts, or random childhood stories from the islands, paddle close! 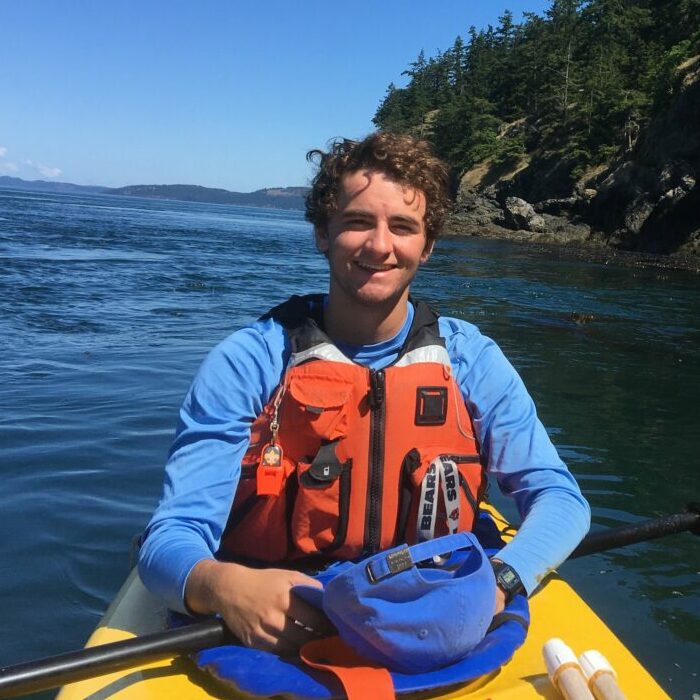 Bobby (23 yrs.) comes to us from Texas Christian University where he received a BS in economics and geography.

He was a college adventure trip manager and has led snowshoeing trips in the Colorado Rockies, kayak expeditions down the San Marcos River in Texas and the Lower Mountain Fork River in Oklahoma and treks up Guadalupe Peak in west Texas. Bobby spent his last senior quarter in Argentina studying and touring the country.

Bobby describes himself as a “leader of leaders”, and he proves it here in the San Juan Islands guiding our sea kayak adventures with some down-home Texas hospitality. 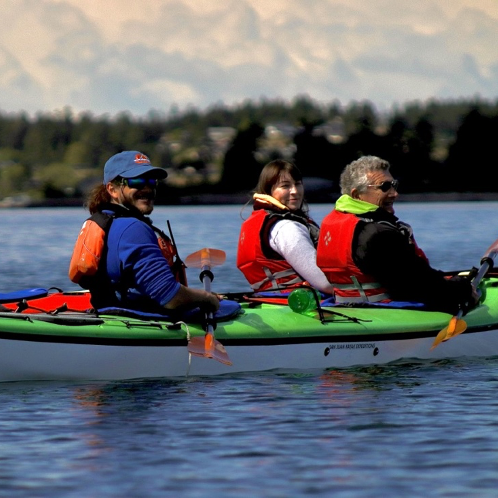 Noah is very excited for his first season with San Juan Kayak Expeditions! Currently he is a Senior at Western Washington University. Since COVID-19 began, he has been back on the Eastside of Washington with the rest of his family, working at Raider Boats. He is incredibly stoked to be able to expand and share his knowledge of the San Juan islands, while also being able to avidly explore them for the summer, with you! During his spare time he can be found climbing, hiking, camping, and being in, on and around the water. 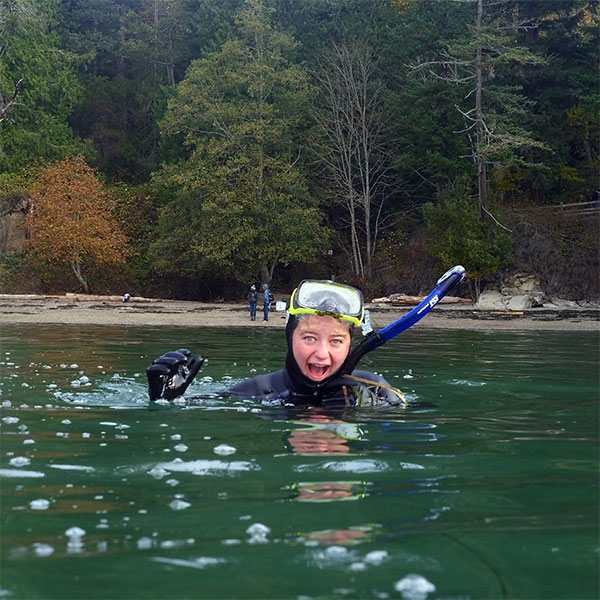 Heyo! My name is Caitlyn Blair, I am a student at Fairhaven College of Interdisciplinary Studies at WWU, graduating in Spring 2022 with a major in Marine Ecological Studies, Place-Based Education, and Community Engagement, as well as a minor in Salish Sea Studies, and Education and Social Justice. I am originally from Colorado, but am a long time lover of the Salish Sea. For half my life, I dreamed of kayaking through islands and channels in the San Juans, and I am more than excited to begin my second season as a guide. I enjoy anything water related, especially swimming or snorkeling. My favorite sea creature is the iconic and beautiful Orca whale, but I also have a soft spot for anemones. I can’t wait for summertime so I can show excited people my very favorite place! 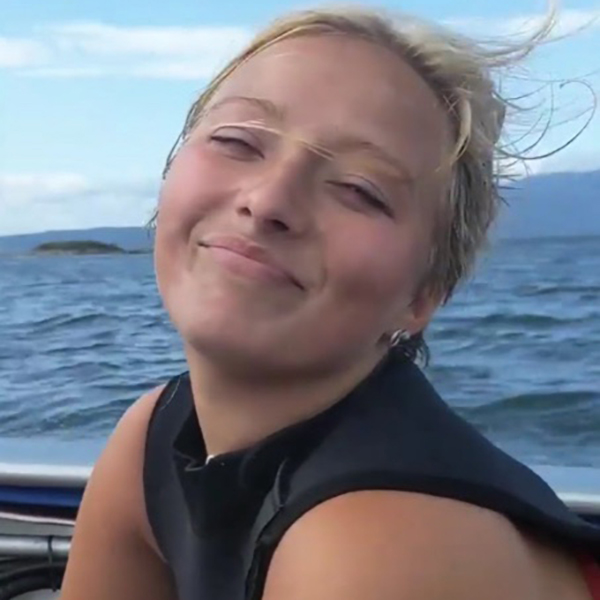 Izzi is water-lover and environmental educator who grew up in the Pacific Northwest. She currently studies with the ocean as a graduate student in UW’s School of Marine and Environmental Affairs and holds an BA in Coastal Marine Resilience from WWU’s Fairhaven college. Previously, she worked in a diversity of marine-related roles such as a Dive Master in Mexico, environmental educator at the Padilla Bay NERR, and underwater cinematographer for Children of the Setting Sun Productions. When she’s not on the water or studying for school, Izzi enjoys painting, hiking, open-water swimming, and making tasty meals with family and friends. In truth, her passion for marine flora & fauna is only dwarfed by her passion with cooking delicious foods. Paddling together is sure to leave you feeling nourished in both body and soul. 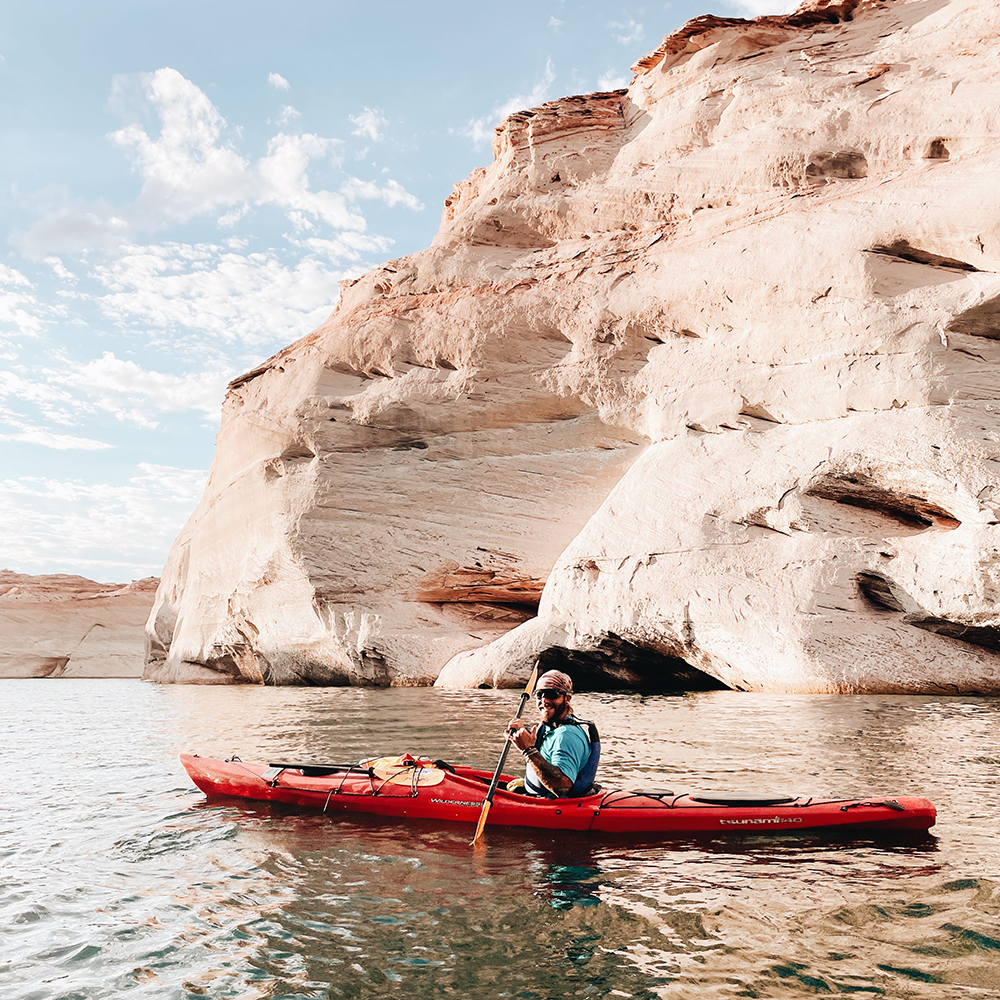 Hi! Christopher here, I am a Native Texan who grew up in and around the water with a great love for the outdoors, mountain biking, surfing and hiking. Most of my life was spent in the oceans scuba diving from Cabo to Hawaii. I am a 31 y/o corrections officer & 911 EMT by trade. Working trough Hurricane Harvey and then all through the heat of COVID made me want more out of life. My wife Katie and I re-evaluated our future and decided to built out a short school bus to travel the county and we just went for it! FULL SEND! Working seasonally within the last two years, I started kayak guiding in AZ on lake Powell. The spark to switch gears to adventure kayaking was struck! I am new to the guiding community but so stoked to be here and soak up everything I can from whoever I can! 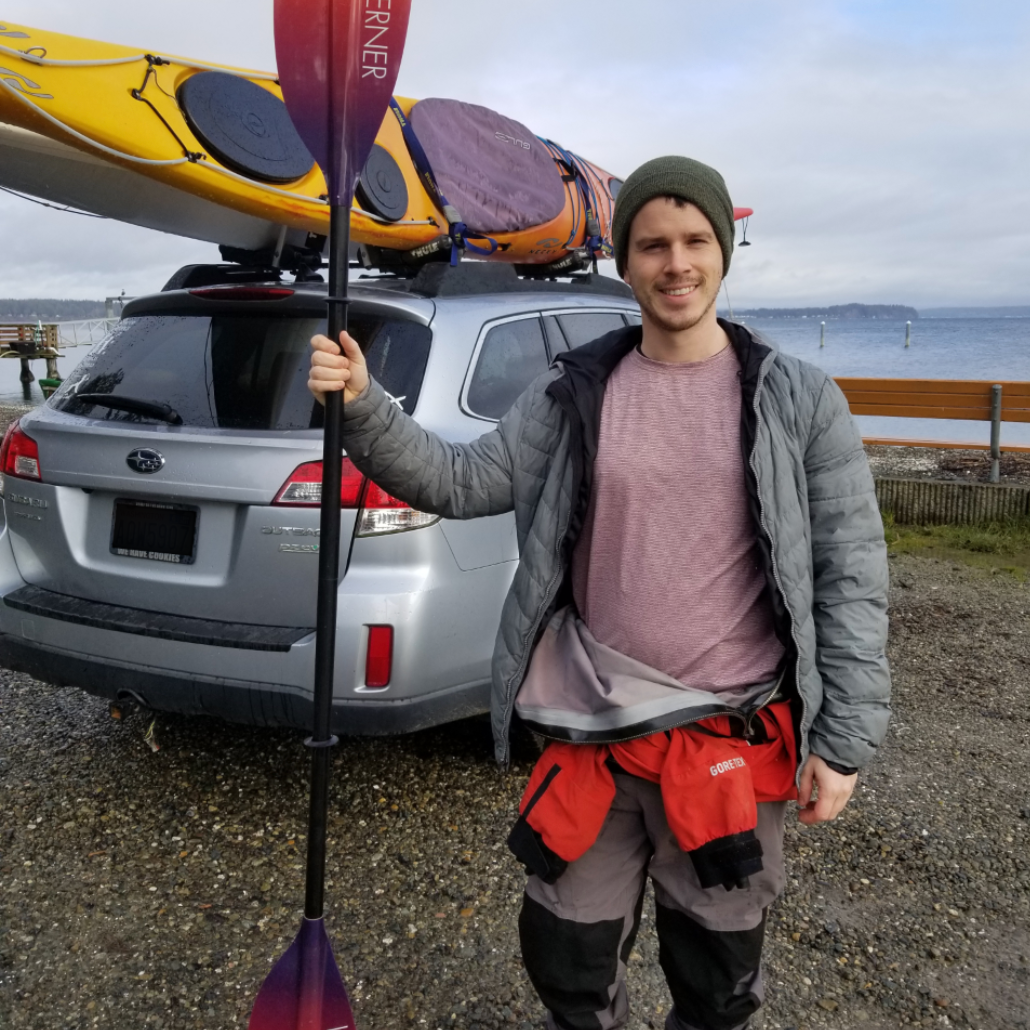 “If the universe allows us to meet for a guided paddle, you’ll be one of the lucky ones. Aside from a keen sense of sights and sounds, and memorization of the islands by heart, my passion for kayaking was instilled to me by my mother. Through a trip with me, I’ll hope to be a proxy of that passion for you. Don’t blink, or you might just miss me kayak rolling.” 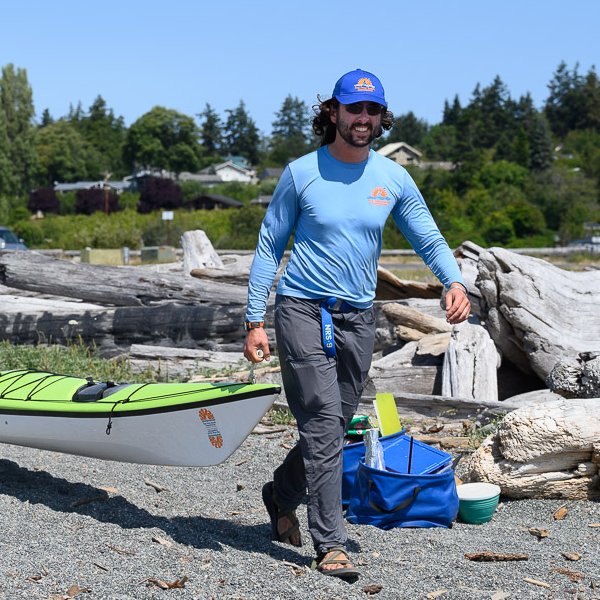 Born a Michigander, Max had many fond memories growing up playing outdoors and in lakes, rivers, and freshwater seas. After moving to Michigan’s upper peninsula and living along the coast of Gitche Gumee, these pleasures turned to passion for conservation of natural environments. Now Max finds himself happiest in the woods or on the water. Beginning his guiding career with Paddling Michigan along the shores of The Pictured Rocks National Lakeshore, he realized that working outdoors was a much greater pleasure than being stuck inside and decided that it would be worthwhile to allow an accidental career change to take place. Since then, he has taken guiding positions in the Portofino and Cinque Terre maritime reserves with Outdoor Portofino along the Italian Riviera, and throughout various places in the Australian state of Victoria with Sea Kayak Australia. He plans to one day be a guide in locations worldwide, including Greenland, Patagonia, and Antarctica. Until then, he’s enjoying every moment along the way, with all the good times and good company that comes with this line of work. 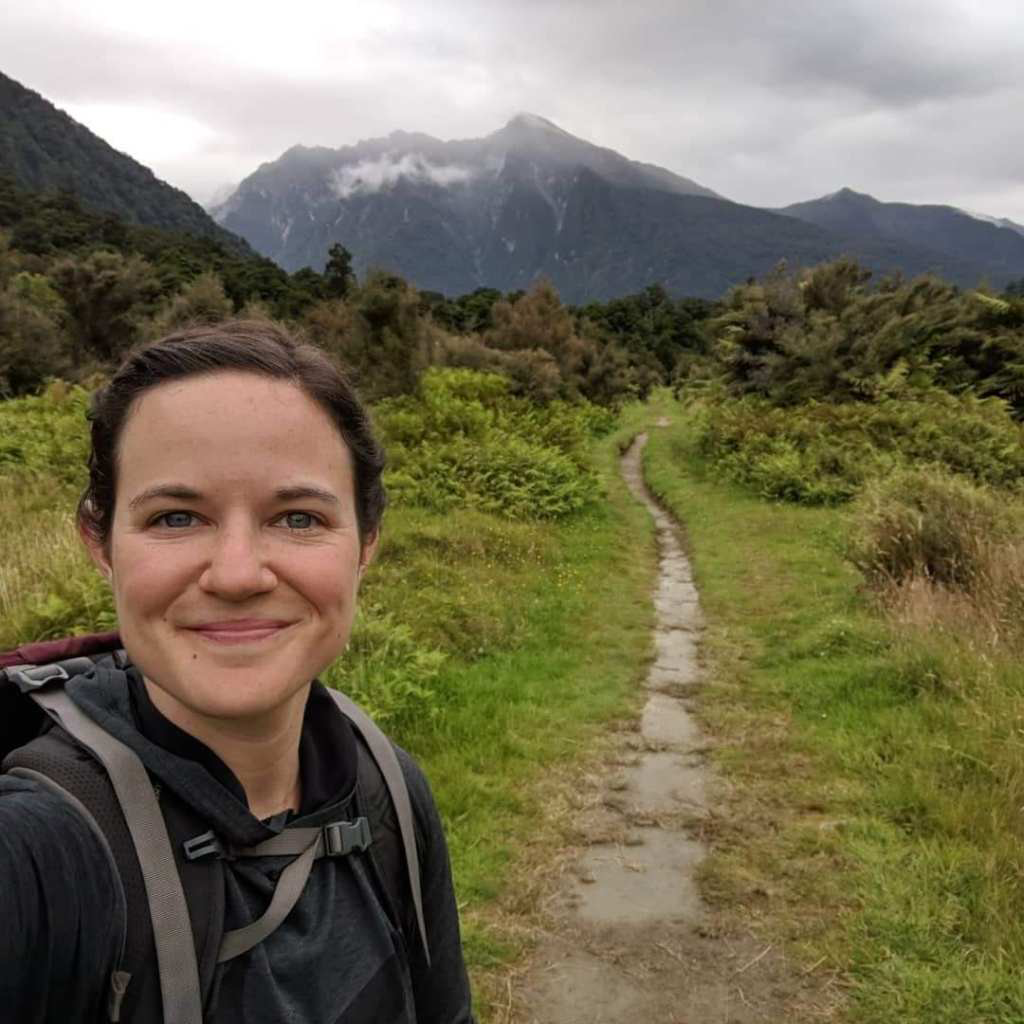 Claire hails from the great state (depending on who you ask) of Wisconsin and after earning a degree in Environmental Science, she booked it on out of there for the West Coast. She has spent the last seven or so years beeboppin’ around the West Coast as an Outdoor Educator and Kayak guide because working indoors for too much time makes her itchy. She loves living on San Juan more than barnacles like living on rocks and is happy to share its beauty. 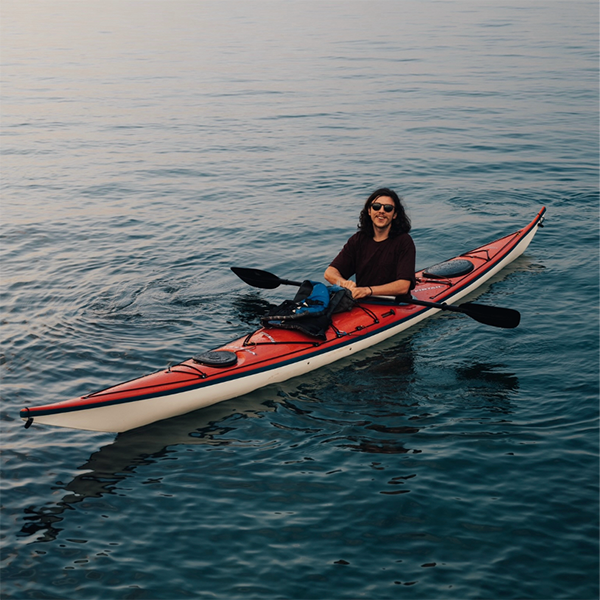 Kile (25 yrs.) is a Michigan-based outdoorsman with a fervent passion for documenting the natural world and the enriching ways we can interact with it. He attained a filmmaking degree from NMU in Marquette, MI, where he discovered his appetite for kayaking and surfing. He has utilized his skills as a videographer to film multiple Great Lakes surfing videos over the years, and is very much looking forward to finding some good waves in the PNW. Growing up on the shores of Lake Michigan, a deep love for life on the water was instilled in his mind from a young age; a love that only grew more immense after guiding at the Pictured Rocks National Lakeshore for the past four years. In the off-season, you can find him traveling the country, exploring national parks, snowboarding backcountry and strumming his six-string. 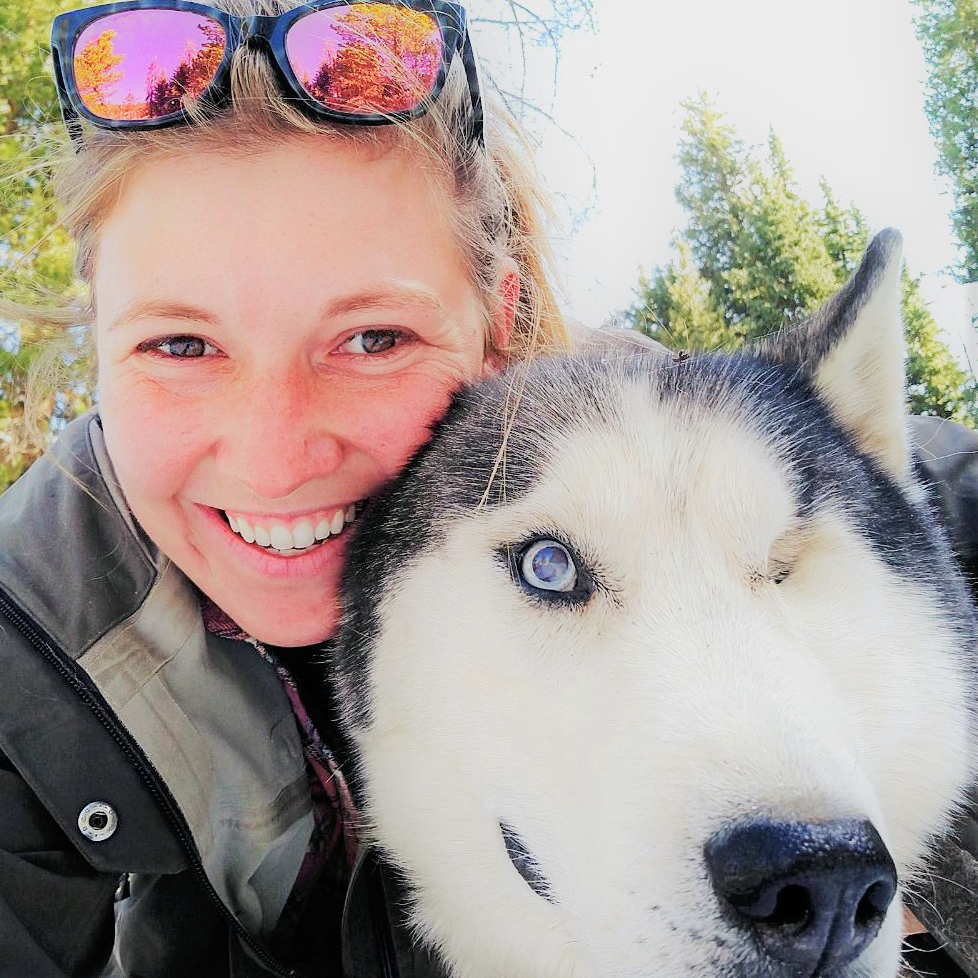 Although this will be Darby’s first season guiding with us, it is far from her first time guiding! She has worked as a guide leading youth and community groups in areas ranging from sustainability to environmental awareness and outdoor leadership, in remote locations across the globe. For the past five winters, and few summers, she has worked as a dog sled guide in Breckenridge, CO.  Previously, she has worked guiding teen travel trips to remote areas, such as the Galapagos islands, the jungles of Malaysia, and high up on the Pyrenees in Spain. She has worked in conjunction with outfitters to lead overnight whitewater kayaking and rafting trips for teens in Colorado. She’s explored the Boundary Waters by canoe and kayaked the Green River in Utah. She grew up sea kayaking off the coast of Florida, and has done countless overnights exploring barrier islands there. She is so excited to explore the San Juan Islands by kayak and share her love of kayaking with you! 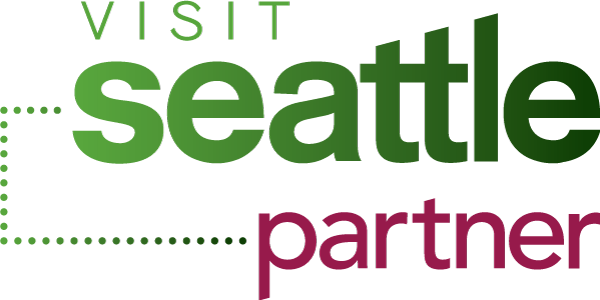